214: Sharing a Love for Thailand with Christophe Cappon

“We think we know the plan, right? But the plan always tends to change on us. I had no idea. But I knew that something needed to change. I grew up in the city as a teenager. I always had this intrinsic feeling that at some point I wanted to get out and to see the world. I didn’t know how that was going to happen. But there was this golden thread that was consistent. It was maybe a little buried. There were doubts and there were fears. There were other pressures, that were like ‘Stay in Toronto!’ ‘Be like everyone else!’ but hey. Sometimes you just need to go with your gut.” – Christophe Cappon

Christophe Cappon is a Canadian who’s uprooted his life to move to Chiang Mai, Thailand, where he founded Thailand Yoga Holidays — an atypical yoga school that integrates the surroundings of Northern Thailand — it’s life, it’s food, and culture – into a series of retreats.

Christophe’s decision to move to Chiang Mai was not an easy one and was quickly followed by a bout of Dengue Fever. Through this struggle, which he describes as an organic process, Christophe unlocked a love of the people and lifestyle of Thailand. He planted roots and built a school that now is “rolling really well,” in his words. To me, his story is an example of the benefit of being open to being unplanned, being challenged, and being receptive to new experience.

I’m excited to sit down and explore his decision to build a life around his desire to see the world and explore his interests, rather than let these things remain hobbies and past-times.

Become a Friend of the Show: Please subscribe and review!

It just takes a second and you can help the show increase its rankings on iTunes just by this simple and quick gesture. We’d be grateful for a review. Leave one here. If you do, click here to let me know so I can personally thank you!

If you have an idea for a podcast you would like to see or a question about an upcoming episode, email me! I’d love to hear from you.

Thank you so much for your support! 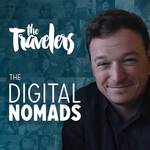 Break free of your cubicle with the 10 best episodes about digital nomads in one handy PDF guide.

Plus, we'll send you a few big surprises 🙂

Got it! Welcome to Holocene. Be sure to check your email for the link to the guide.

I’m a lifelong international traveler, the host of The Travelers podcast, and founder of Holocene, a framework and community for writing the story of your life using travel and creativity.